"Learning The Law in Nigeria" -- "God I never knew that!" 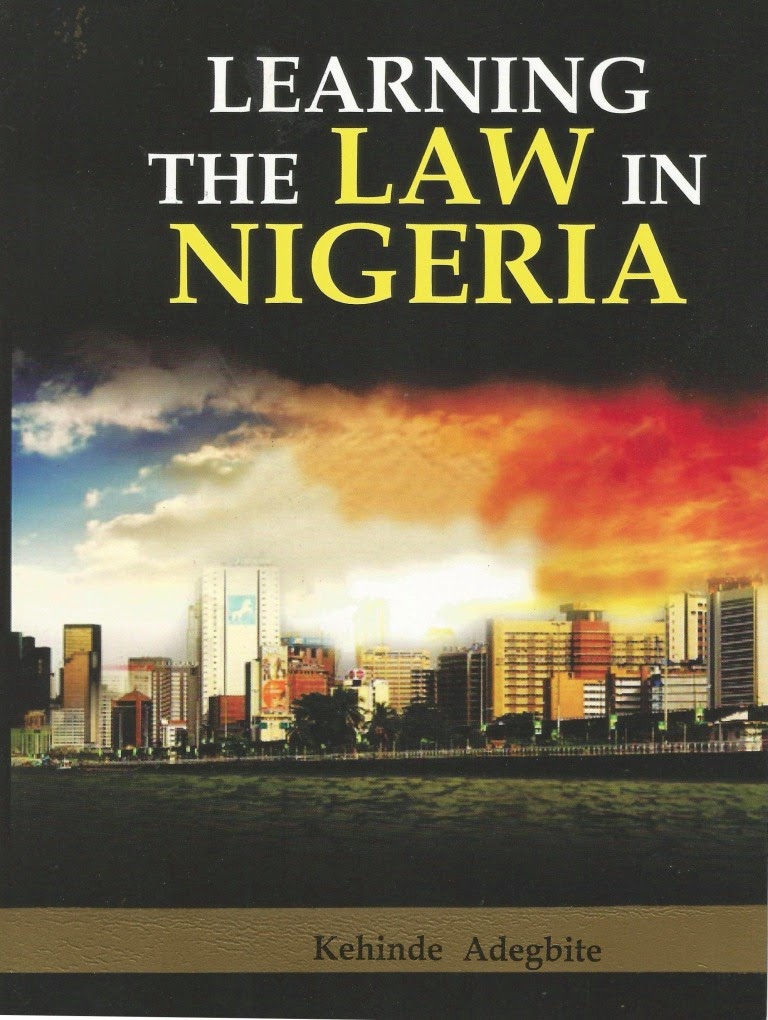 Life is short. In Nigeria, it’s even more so. WHO data shows that any Nigerian above 55 is on extra time. We (are supposed to) live shorter lives than most other Africans.
That’s what makes Kehinde Adegbite’s first book How to Write Your Will with Ease important. What makes it more important is that it equips the reader to write their will without the services of a lawyer!
I remember listening, years back, to a lawyer’s lecture on “Will” and those Obahiagbonese: “A Will is a testamentary and ambulatory instrument.”, “A testator may bequeath his real and personal hereditament to his intended heirs...” At the end, the lecturer-lawyer succeeded in completely mystifying will writing. Adegbite’s first book undid that injury as it totally demystifies the entire will-writing process.
And now I’m concerned with his second book. “Learning the Law in Nigeria”. This fresh release is an important book for everyone and is accessible to anyone who can read and understand elementary English – which is why I think most lawyers should feel threatened right now. Our politicians are conceding defeat left, right and centre – so, no more job for the boys at the Tribunals – and a book is coming out to liberate Nigerians from professional legalese shackles. Not a good season for lawyers, I’m sorry.
There’s a common communication maxim: whatever can be said can always be said simply. To that I often add: except by a lawyer. Well … Barrister Adegbite has proved me wrong.
Throughout the 400+ pages, I kept on repeating aloud: “God, I never knew that!” Adegbite’s book is indeed not your typical law book both in the simplicity of its language and the exhaustive treatment of the subject matter in the Nigerian context.
Some jolting highlights for me include these: (1) you can represent yourself in court, even up to the Supreme Court except you’re being tried for a capital offence. (2) The law does not recognize “Mr and Mrs” as, say, the owner of a property. (Guys, get talking to Madam over this o)
I love Part XII of the book – the Law, Women and the Indigent. There he gives a long list of agencies and organisations in Nigeria – with addresses – which provide free legal services to the poor. If only the thousands languishing in detention today because they can’t hire a lawyer would have this information!


Before accusing me of undue promotion, check out the table of contents here.
Posted by Ayobami Ojebode at 9:30 AM No comments:

My article on Radio Netherlands Worldwide this week is on Dutch signs. Here:
Posted by Ayobami Ojebode at 12:02 PM 58 comments:

My article on Radio Netherlands Worldwide this week is not on Dutch doctors or lunch. It's about something far more serious. Here.
Posted by Ayobami Ojebode at 1:26 AM No comments:

My article this week on Radio Netherlands Worldwide is on Dutch Lunch. Enjoy it here.
Posted by Ayobami Ojebode at 1:54 AM No comments:

Yes, I am back in Holland. Every Friday, for the next eight weeks or so, Radio Netherlands Worldwide will publish my short articles on their website. I write short pieces on my experiences in the Netherlands. Here is the first: http://www.rnw.nl/africa/article/africans-going-dutch-part-one-dutch-doctor
Posted by Ayobami Ojebode at 2:16 AM No comments:

An Accident in the Waiting A few days to the General Elections held in April 2011, a miracle happened all over Nigeria: there was remarkable increase in electricity supply everywhere including the villages. Many streets were hurriedly lit and there were lights in Ibadan on roads that end in the bush. Many roads were hurriedly patched. Garbage heaps were cleared regularly in Ibadan for almost one whole week. Elections have gone and life is back to (ab)normal. Darkness has returned to most parts, and many can’t find kerosene to buy. Was any voter by government’s hurried ‘window dressing’? I doubt it. Meanwhile, I spotted this electric pole a few kilometres outside Ibadan yesterday. 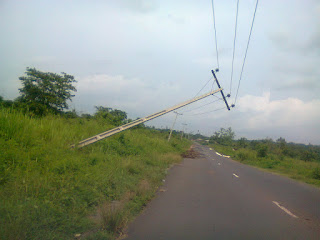 This is a sure sign that the elections are over. This pole will have to wait till 2015 when another round of elections will hopefully hold. Or—it will get government attention if (I pray not) it electrocutes a few influential people. It's an accident in the waiting! But who cares?
Posted by Ayobami Ojebode at 1:58 PM 6 comments:

If you went to Ibadan, you would know that the City of Brown Roofs is distinguished in many ways: the city spreads on and on and on with neither end nor pattern; the roofs are indeed red-brown with sparkles of other colours here and there. Also, you would notice that there is refuse everywhere you turn--as much refuse as you want. Pace-setter town, Ibadan houses the first Nigerian university, the first TV station in sub-Saharan Africa, a national museum, the national archives and many more. 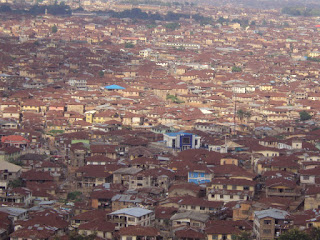 But few tourists visit these landmark places. Why? Ibadan does not need a tourist centre because the entire town is one big tourist fascination. Many people visit Bower's Tower in Ibadan, a colonial legacy that allows you to see a huge part of Ibadan and then conclude that you haven't seen a quarter of it. My friend and I visited Bower's Tower recently and were unhappy with the sight (especially the stench and the refuse on the way to the Tower). Bent on impressing my friend, I took him to another Tower which I call Beer's Tower--salute to Nigerians' creativity! 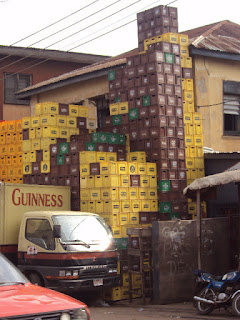 How on earth do they get to the top of this? 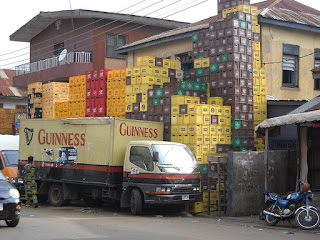 Posted by Ayobami Ojebode at 6:09 AM 6 comments: